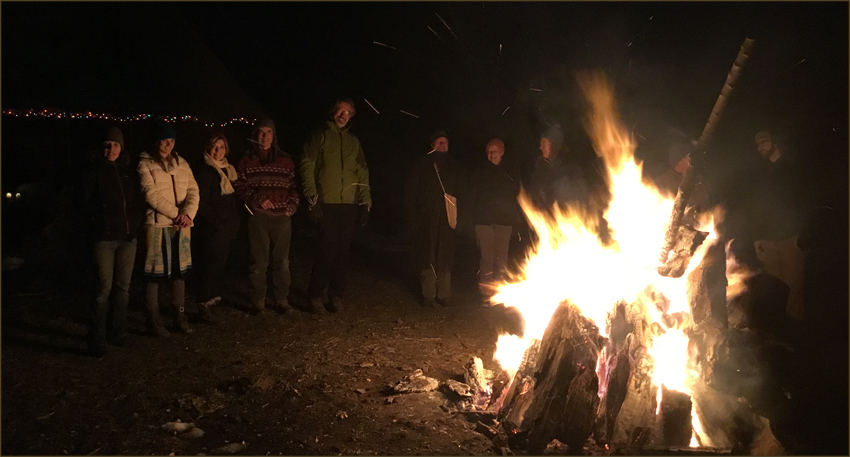 Winter Solstice Ritual
A near full moon, a clear star-studded sky, a warm fire, lots of people and a sacred gathering for the Winter Solstice, all culminated on the same night. It was December 21st, the annual ancient ritual time of peoples around the world, when individuals come to the fire, hoping that the ritual to Father Sun would in some small way convince Him to return with more light, longer days and the promise of another good and abundant year.

This is the time to let go of the things that don’t serve us any longer. Letting go of the obstacles that keep us from our fellow brothers and sisters, community and from the gift of being who we are meant to become.

As it happens every year at this time, we gather at the fire and four people each hold a direction, taking turns to speak to the group gathered, relaying the message, teaching and guidance each direction has for the coming year.

The North ~ Wind
The North spoke telling us that when we are still the Ancestors are especially able to speak to us, we are able to hear. This doesn’t mean they only speak when we aren’t quiet. Stillness and hearing can happen during action, we can receive and hear if we act with a listening and openness to hear.

The Wind carries the voices of the Ancestors on his course. He enters through the breath, permeating our cells. He spoke of receiving rather than taking. Receiving the Ancestors’ guidance and the Song for our lives as the precious gift that it is. You don’t grab a gift, you humbly and gratefully receive it.

The North~Wind, also spoke of all the people gathered around the Fire that evening. We had all been called to this place/land by the Ancestors and had listened. We were here. They had something to teach us. All the places/land, that each of us had walked and lived on before this evening was no mistake. The Ancestors of all those places needed to imprint us with something. If we didn’t hear it at the time we were in those other places it’s still with us if we open ourselves to hearing it.

The West ~ Death
The West spoke telling us that there really are no endings the way humans believe. Death and endings are a completion of a circle, creating emptiness, making space for the new and the beginning of the circle’s continuous journey.

The West told us not to fear change, not to fear letting go because we are supported and not alone. If we let go and open ourselves to the message of the West we will experience possibilities beyond our limited human minds.

The South ~ Flint Knife
The South spoke to us of fullness, abundance, growth, courage and how to use it’s great tool, the Flint Knife. The South spoke of proper use of the knife: to use it for good, selflessly, to help others, for community, unsheathe it when you are being called to use it. Use discernment, use your heart to teach you how to use the Flint Knife. Use it to cut away thoughts of action that don’t serve community, people. AND DON’T USE IT FOR ILL.

The East ~ Water
The East~Water spoke to us about the Creatrix, the womb and how we are held by her and are made from her Waters.

The East also spoke about direction-less-ness. Our colonized minds have a notion of growth and birth being a certain direction, moving forward and looking a certain way, yet she, East Water has no direction, she can move us forward, backward, up, down, hold us still for a time. She said open yourself to the flow and movement she wants for your life, open yourself to the mystery. This is how she gives us new beginnings and growth.

One person in the circle responded to the East Water and it’s direction-less-ness as having an image of a snow flake: how it’s form comes from the Wind, Clouds and Water, always perfect, but never two the same. We are like that.