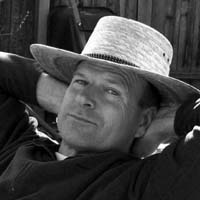 Gary is a marakame (initiated healer) in the tradition of the Huichol Indians of western Mexico, and a granicero (initiated weatherworker) in the tradition of the Nahua Indians also of Mexico. He has been a practitioner of Rolfing® Structural Integration since 1988. Gary serves his community in his role as an initiated firekeeper holding monthly community fires and men’s fires at his home in Mesa, Colorado.

Gary and his wife Deanna Jenné have been working to bring the dream of the Mesa Life Community to reality since its inception in the spring of 2004. He views living in intentional community as an important step towards remedying the isolation and separation so prevalent in our non-communities. He admits that it isn’t easy learning to make group living decisions and he understands why community living is not a popular choice. He is willing to accept the challenge because of the sharing, support, and camaraderie that he finds as the result of working together.

Gary feels blessed to have his home on the shoulder of the Grand Mesa. He is grateful for the weather, animals, mountains, trees, plants, waters, and people that he finds there.

Rolfing® is a service mark of The Rolf Institute of Structural Integration.