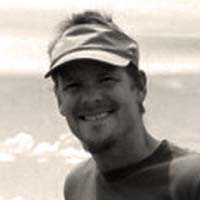 Chris came to life in the prairies-cum-suburbia of Chicago, IL—six weeks earlier than expected. It was the last time he showed up early for anything.

He loved the family excursions to the lakes and woods of central Wisconsin, but a trip out West with a pop-up camper in tow changed his life. When the young flatlander glimpsed the Grand Tetons of Wyoming he knew his days as a Midwesterner were numbered.

Brief stints with community living in Ann Arbor, MI and then Boulder, CO taught him that, reactionary propaganda notwithstanding, cooperative life was not only possible but quite viable. Lucky for him his wife-to-be Paige felt the same way.

Graduate school lured him to the Far Out West and he settled in northern California to study Imaginal Psychology—a darker, earthier sibling of Transpersonal Psych. Though intending a temporary stay, he spent the next 14 years in thrall to the forests, rivers, and ocean of the North Coast—and connected to a community of kindred souls. He also trained as Wilderness Rites of Passage Guide and worked as a hospital and hospice chaplain.

Today he lives in Mesa where he is realizing his lifelong ambition to be a country bumpkin. He works with teens as a Guidance Counselor at an improbably excellent alternative high school and curses his Internet connection as a Contributing Editor at the Sacred Fire Magazine. In his imaginary spare time he is working on a memoir that might be true, momentarily called “On The Occasion Of Reading Bachelard’s The Psychoanalysis of Fire: And Dropping Out Of Grad School And Into My Heart.” Other goals include learning to hunt Elk, quitting all his jobs to become a hermit-writer, and learning the banjo and playing the entire Nick Cave songbook—bluegrass-style.

Though grateful for all that his family and suburban upbringing provided, Chris comes to community convinced that the quintessentially American development is following the dodo bird off the edge of the world. “Long live individuality,” he says, “but individualism is done.” He brings to the Project a beginner’s fluency with consensus and an ability to reel in sprawling discussions back to their original purpose.

“For me the Mesa Life Project is an opportunity to actively create, in concert with inevitable limitations, a life that’s alive with satisfaction and possibility. I’m learning to surrender to that bigger Will, but I’m not going belly-up to the status quo.”